Showing posts from September, 2017
Show All

The Ultimate How To Guide to Making Trailers

By James Deakin September 24, 2017
Source: Ian Wall, Media Magazine, April 2014 The Purpose of Trailers Trailers have an obvious purpose - to make people want to see a film. The purpose is essentially to give the audience an idea of what the film is like. To find a film pleasurable, it needs to have something new about it but also it needs to build on the knowledge and experience of the audience.  Franchise films use this. Unique selling point In order to market a film, the distributor needs to decide what sets the film's USP (unique selling point). They need to look at the aspects of the film that set it aside from other films in that genre. They will look at the storyline to see how the film differs from others in the same genre and see what the key parts of the story are. In addition, they will look at the actors that star in the film, the director and any special effects. The USP of a film will help potential audiences come to an understanding of what they might expect when they go to see the film. The target au
Post a Comment
Read more 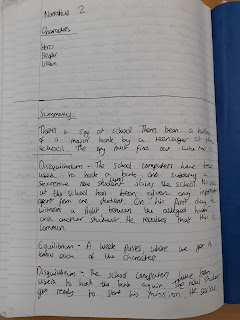 * All examples taken from 2017 trailers The Vocabulary The Turn Line This is the part of the trailer where the music drops out and there is dialogue. This is usually the point where the action starts. (Good examples: ) The Rise This follows the turn line. It lead to the big finale that the trailer builds up to. Hits Pounding dramatic booms used to punctuate trailers. (Good example:  ) The Button This is the scare or joke that comes immediately after the main title reveal. It ends the trailer with a bang. The Soundtrack It is important that the right soundtrack is used, as they are a very important part of the trailer. Some soundtracks are made specifically for the trailer, which makes them fit perfectly with the scenes that are in the trailer. Sometimes, this is not the case. It is important that the soundtrack effects the person emotionally, as this will mean that they are more likely to go and watch the film. The soundtrack helps to sell the film within the short amount of time that
Post a Comment
Read more
More posts